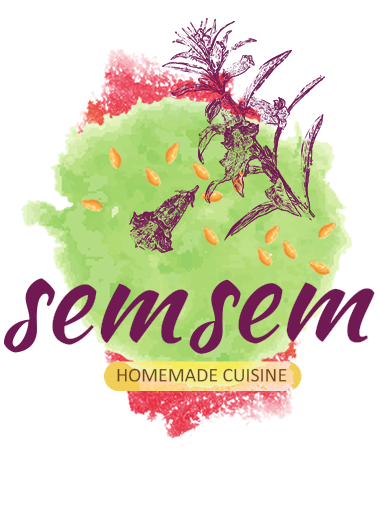 Kaakeh (pronounced Kah-ek) translates to ‘cake’ in Arabic, although kaakeh does not resemble the traditional cakes that are recognized in the West.  Kaakeh, in the Middle East in areas like Palestine, Lebanon, Syria and Jordan, is a very popular savory bread, shaped much like a small purse.  I understand that some might compare it to a Western bagel but I think the taste of Kaakeh is truly unique.

People who move  away from this customary bread miss it almost right away. A bread that they take for granted, so readily available to them is suddenly gone when they move abroad. It’s places like SemSem that bring that great taste home for them.

The kaakeh bread is typically covered in sesame, a popular ingredient in Middle Eastern cooking and certainly at SemSem.  When made fresh the bread is irresistible and makes for a beautiful centerpiece.

In the East these tasty bread-rings are as ubiquitous there as crackers are here in Canada.

As mentioned Kaakeh is a very popular bread sold in the East by street vendors.  It is often stuffed with falafel, cheese and even eggs, then oven-baked.  When sold outside the aroma of fresh baked bread drifts down the streets, making it impossible to resist.

Those who visit Jerusalem or Lebanon and touring the ancient ruins or walking the streets of Amman, will have a good chance of readily finding a Kaakeh vendor with his or her little cart at the ready, calling out that they have available Kaakeh. “Toasty, toasty Kaakeh” –  It’s a great breakfast.

The Kaakeh is made early in the morning, baked in traditional almost medieval-looking open-flamed ovens. All the workers at the bakery are in a hustle to get the first kaakeh ready to deliver to street vendors.

The Kaakeh will dangle off rails on the carts, swaying back and forth as if to taunt. Once you buy the kaakeh you have your choice of filling and then, of course, it’s toasted up. It is meant to eat warm, fresh from the oven.

It has a chewy inside but crispy outside and is infused with thyme, sesame, and sumac. Just about the best comfort food and a convenient snack while walking.

At SemSem they take those traditions seriously and they have captured that same original great taste in their After 8 kaakeh.

The SemSem After 8, following trusted recipes, is truly a fan favorite, bringing that authentic great taste to the table once more.

Can you resist the irresistible call of this traditional bread? I know I can’t and won’t!

An article by Jessie Moore